Planting a tree is not enough:

A few things to acknowledge, things we still not added to our collective consciousness, but that can strike our thoughts in any given moment (waiting in line to pay your expenses, walking down the street towards anywhere, taking a fortunate shower); things that should be a central preoccupation in our human life – …trees… -. However, we worry too much for ego issues, maintaining an image, and a series of obstacles for our hearts, given by our dear system.

The “Argentina’s Web of Municipalities against Climate Change”, through the “Climate Change Local Adaptation Program”, delivered an article where the UN alerted on the exponential increase of greenhouse gases emissions worldwide in the last 100 years.

The article states it clear: “the objective fixed by the international community in 2009 is to maintain global worming in a maximum of +2°C in relation to the levels of temperature before the industrial era. If those 2° C are surpassed, scientists consider that the planet will enter a climatic system marked by extreme phenomenons.

With an annual mean of 400 ppm of CO2 concentration, the expected global warming will al least be of 2.4 °C, according to the last climate report from UN’s experts. And the perspectives are quite pessimistic: CO2 atmosphere emissions do not stop increasing, and if it keeps on going this way, temperature could climb up between 3 and 5 °C.” 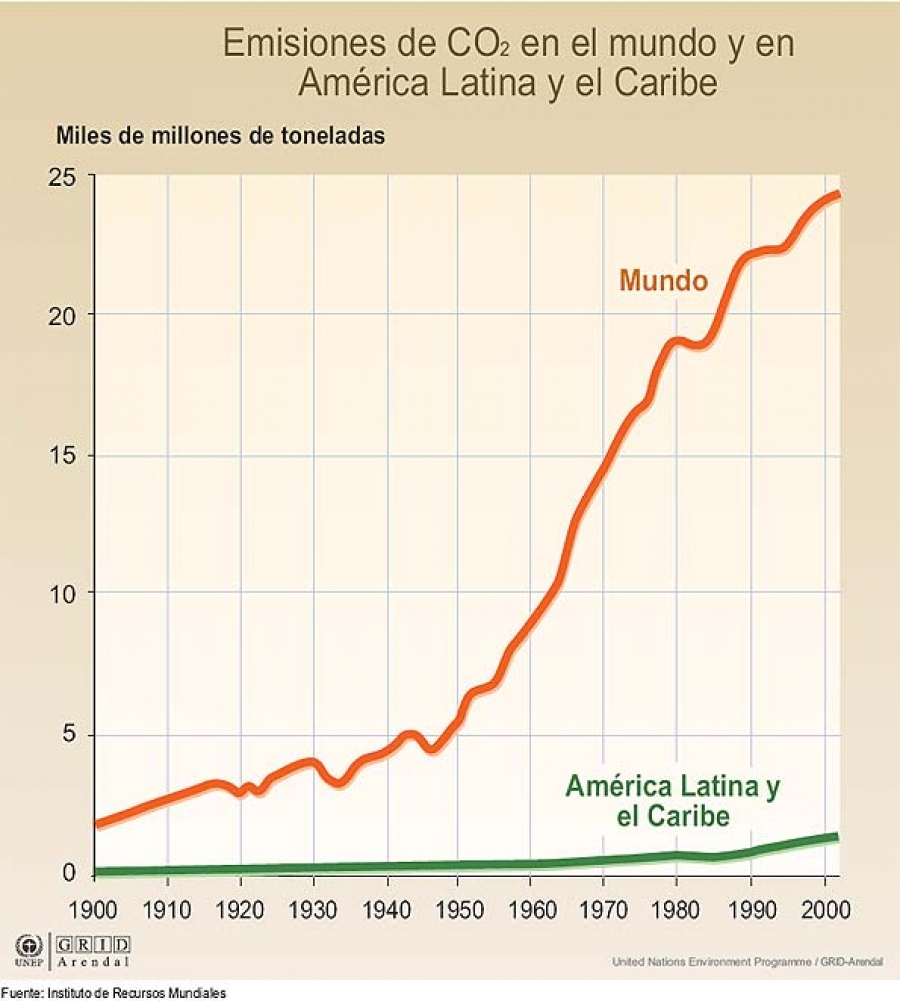 This graph shows the clear emission increase. Hence, we can no longer say that “the climate is crazy” for it has been US the ones who drove it mad.

But take a look at this: in Latin America (and the Caribbean), although an increase in CO2 emissions exists, this is much less than the rest of the world. Does this mean that the inhabitants of Latin America hold no responsibility on these emissions?? – OF COURSE NOT.

Because there is another exponential curve that worries me/us: the exponential increase of chopped down forests, cut down, extirpated from Latin America.

If we take, for example, the Chaco Forests in our country, a “Deforestation Monitoring in Chaco’s Native Forest Region in Argentina”, given by the Argentinian Chaco Agroforestry Web, reveals the gravity of the matter.

You can see how the incorporation of soy in our productive system and how the end of convertibility (and the consequent devaluation of our currency) gave a greater impulse to the destruction of our forests, by opening Argentina’s legs to the international market (if the market asks for soy, we must deliver soy in order not to stay out of the game) and the dehumanizing exploitation of our natural resources. According to the report, the Forest National Law did not help so much as well, “primarily related to the clearing authorizations granted in the preamble to the enactment of the Law”

This is an example of how wrong things work, and how you have a negative impact in the environment when money and short term profit rein our daily lives. And this weak and unsustainable management occurs with every single resource.

“(…) taxes paid by companies to the State do not compensate at all the inflexible shortage of mineral resources given by nature, but that will not be renovated by her.”[1]

Developed countries are still developed because they keep on sucking foreign resources, industrializing our nature, sending more and more emissions into the atmosphere. Meanwhile, they take from our ecosystems the possibility of absorbing those emissions and transforming them into oxygen. And so, we leave our Pachamama motionless, sterile, contaminating her with no chance to recompose. We leave her naked and send her into exile.

“The delay structure from the Latin American fields operates as well as a waste structure: a work force waste, of available land, of capitals, of products and, above all, a waste of the historical development opportunities. Latifundium and its poor sibling, smallholding, constitute, in almost every Latin American country, the bottle’s neck that strangulates the agricultural growth and the development of the economy. (…) Latin America spends, annually, more than five hundred million dollars buying foreign food which she could produce on her own in her immense and fertile land with no difficulty at all.” [2]