BA 112 – Ill fated Publicity, a forgotten National Constitution and a Constitutional Protection for the Earth

Companies manage to sell us anything… and they can do so, as long as they postulate their product to our eyes as a means to achieve a greater social status, power, good-looks, virility, social security. Every time they manage the viewer to associate their product with a greater lifestyle, the sale is partially guaranteed, and the fallacy is totally concreted.

“The control of the market results, on the other hand, facilitated forehand by the magical prestige that, to the eyes of the middle class, brands and models irradiate, promoted by gigantic worldwide publicity campaigns.” (E. Galeano, 1971)

And it has to be the middle class the one who swallows the publicity´s lie. Because for most of the marginalized people, the publicized products only represent an illusion of reality, the reason why they are in that condition, the system swallowed them… 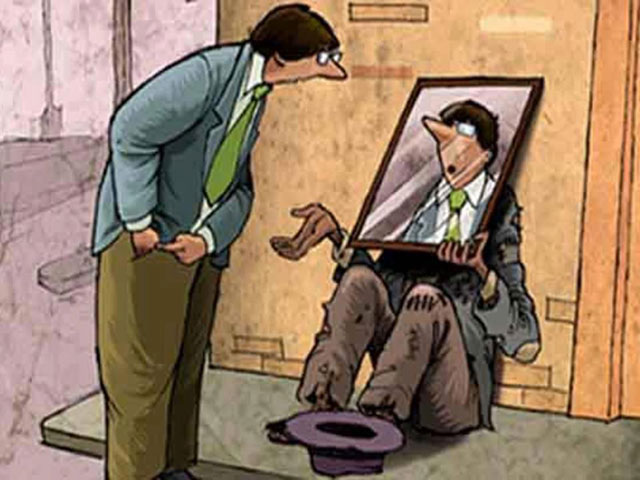 A big friend of mine, Ezequiel Benvenuto, a Natural Resources and Environmental Engineer student, wrote not so long ago:

And it is true, the TV seems to bullying us… Honestly, I am tired of seeing women seen only like servants of the house, who have nothing else to do, no other role than that one; I am tired of seeing the suited guy, getting out of the new car, entering a huge house, with his son admiring him for having that car outside. Why are they not publicizing the pollutants? Or where does the oil that keeps them running come from? From which mountains have they extracted the metals that form them? Which families have suffered in the extraction? Not even thank you. 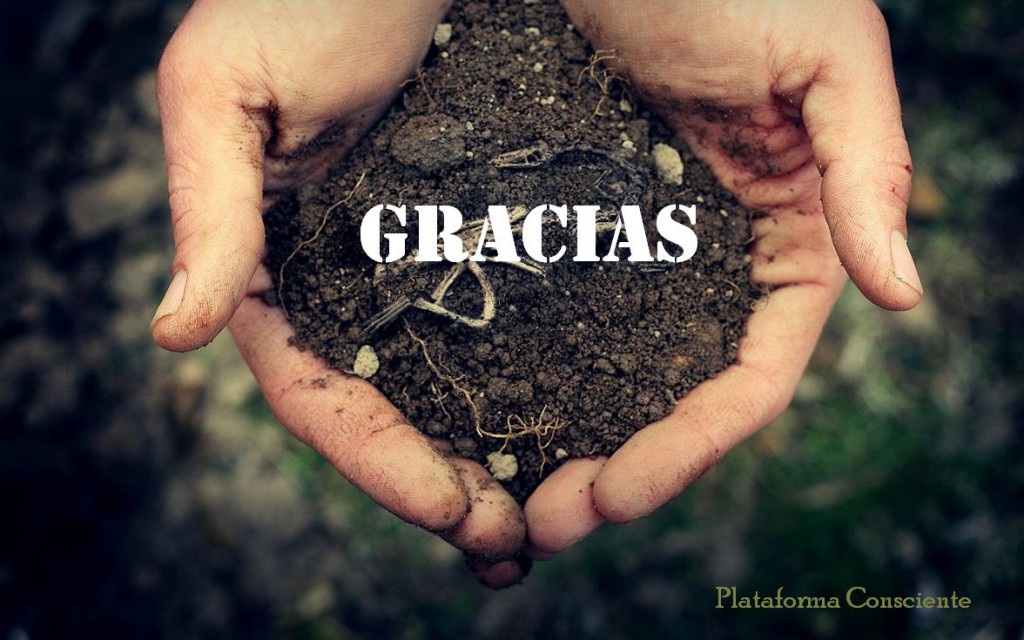 I don’t understand how there can be so many shampoo brands, with their futuristic laboratories and super discoveries on how to fight anything. I am tired, I say, of seeing how they force you to delay the fact of being old, like if getting old, doing well along the way, wasn’t the best thing one can ask, to be old, with dignity. Let the wrinkles in your face tell stories of a walk of life.

Article N° 42 of our forgotten National Constitution promises in vain what follows: “The consumers and users of goods and services have the right, in that related to consumption, to the protection of their health, security and economic interests; to appropriate and true information; to the freedom of choice, and to equitable and dignified conditions of treatment.”

Then, why while I stir my last soluble coffee in my life do I stare to the back of its label, provided by Nestlé, and find no information on the REAL origins of the coffee I am going to drink? It doesn’t even have the Nutritional Facts! Could it be that they buy cheap grains in Brazil, process it elsewhere and sell it everywhere, imposing economic barriers to Brazil, in order not to let her sell her own coffee?

“The world’s soluble coffee market, with an astounding expansion, is in the hands of Nestlé and General Foods (…) Brazil only has the right of provide for the raw material to enrich the factories abroad.” (E. Galeano, 1971)

Galeano wrote these lines in 1971… 42 years later, drinking this last soluble coffee, a friend of mine tells me, “But I have been drinking this coffee for the last 20 years! Why didn’t I know anything about this?” I didn’t know either. That is why I now know that the most hypocritical thing I have ever done in my life is to drink a coffee in Starbucks, while reading Galeano. With punches going out of the book towards my face.

Where is the appropriate and true information promised by Article N° 42? In fat pockets, and bought silences…

The label of this failure only says: “It is good to remember. Starting up your day with a tasty coffee, acts over your body and mind” Ah, yeah? How, exactly?

And the logo says> Good Food, Good Life. The Latin America which extracted all what is natural from the biosphere, and transformed it into added value only by order of the system, is not being well fed, nor having a good life. And worst of all, the fact that the system works through rules which are easy to break by only achieving a massive consumption habit shift. <<MASSIVE, remember the Environmental Massive Movement>>

Why no ream of paper informs me how many litres of water were contaminated in making the paper so white? And, of course, they won’t tell you how many trees are equal to those papers… And what about the water used in the depuration processes regarding the extraction of minerals which are coveted as ornamentations of The Lie by those who have the money to buy them? I can no longer drink the water the Earth was keeping for me and future generations. 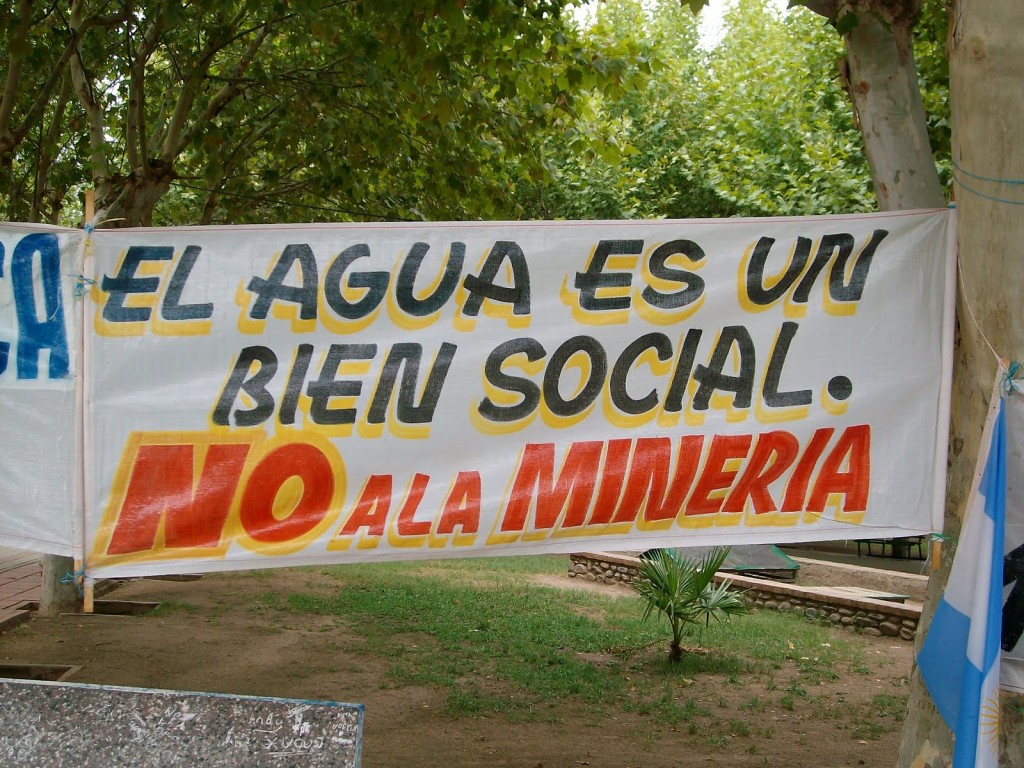 “Water is a social good. NO to Mining”

If we talk about equitable and dignified conditions of treatment… Why does none foreign company admit the use and abuse of cheap workforce in Latin America? Is it because by admitting it, it would cause to us, mere consumers, indignation? Is it because, if they confess their systemic raping acts to the Pachamama, we would stop putting our salaries in them waiting for only comfort?

Of course, let us not insinuate that the regional market is more important tan the international market…

A Constitutional Protection for the Earth:

I got mad and went for a ride on my bike in the cold night, here in the flatlands that cover La Pampa. I wanted silence… but in the lagoon you could only hear dogs barking… and motorcycles… (Always, the motorcycles). An efficient vehicle to move from one place to another, compared with the car, yes, indeed. But the exaltation of the ego through a tailpipe does not seem to me as the most productive thing we can be doing. And not at all should it be, for those who have the access to that motorcycle. That small middle class that’s left, as Galeano said…

Those who had food, education and transportin the last 25 years are really fortunate, and we don`t even acknowledge it. It is us who, representing the majority and so many other that stumble and fall and do not receive our help to stand up, have to go out and be all of us, together as a species, the ones who reconfigure our everyday reality in society.

I rode for an hour, the album in my ears came to an end and I was thirsty. I wanted to find a drugstore open, but everything was close, until I found a place with bright white light and got in. I wanted a juice, something kind of natural… but did not find anything, the store was full of gaseosas, Coca-Cola brand only. And the Cepita Orange Juice, which I swear it was much more tasty when I was young, said on the very bottom of the label, with tiny letter: The Coca-Cola Company. I laughed, went out of the store and the world seemed to have moved on during those brief minutes I got in… it was late at night, the street absolutely empty, and when I got out I realized it was a gasoil station… the only place open in the city, ready and willing to sell you oil. I got furious with reality. 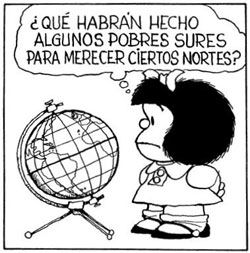 “What did certain souths to deserve certain norths?” – Mafalda by Quino.

I was sad, feeling that, no matter how hard I tried to get out of the system, it was always there forehand, knowing in which corner I was going to turn, waiting for me. And I remembered the article that followed the other one.

Article N° 43 of our National Constitution says that –read consciously- “Any person can ask for an effective and quick constitutional protection, (…) against any act (…) that in an actual or inminent manner injures, restricts, alters or threatens, (…) rights and guarantees recognized by this Constitution.

(…) This action shall be made against any form of discrimination and anything related to the rights that protect the environment.”

This means that any person who sees threatened the environment in which he/she lives by any company, HAS A LEGAL TOOL TO MAKE HIMSELF BE HEARD. 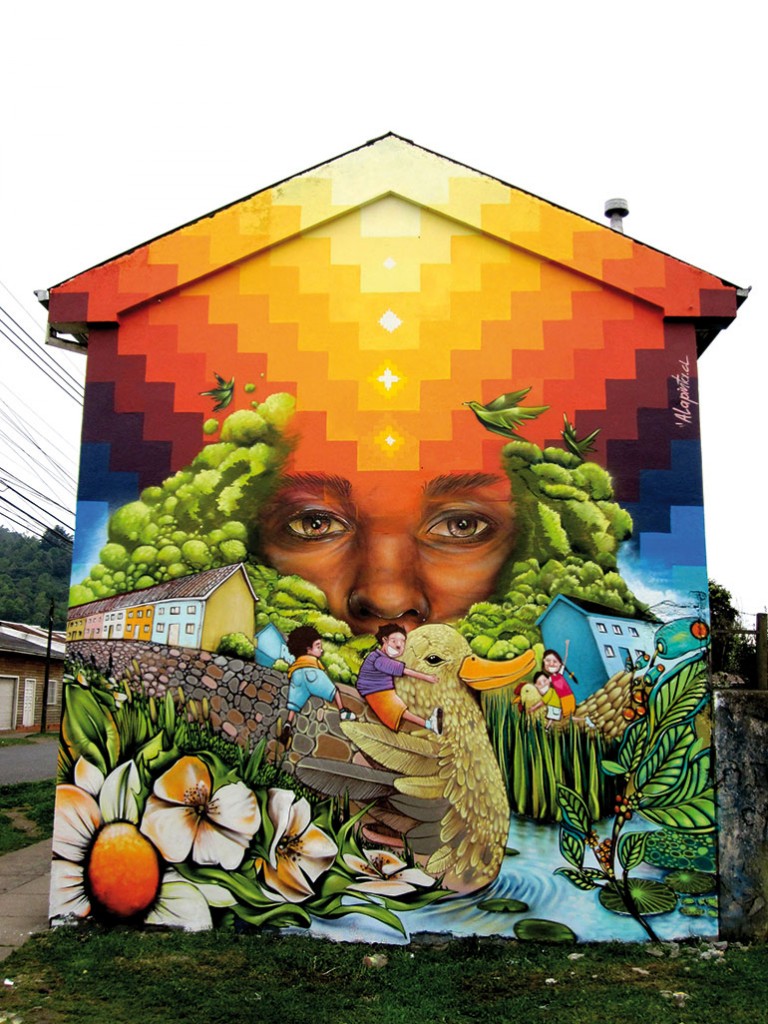 I believe that it all the tribunals of the country received more than 160.000 in each province (For you to understand the dimensions of this, the Tierra del Fuego Province has only 126.190 inhabitants, according to the 2010 census) defending the planet, in a few months, those actions would indeed get quickly to the mass media, grabbing the attention of everybody, allowing to reconfigure the system quicker than we thought.

I arrived home and thought: an Environmental Massive Movement. I think that is the one thing I want to see before I die… Is it just and idea? Something impossible? Or is it something that can be done if we react as one in defence of Nature?

“And today, more than ever, it is essential to dream. (…). My best friends live fighting for this right; and it some have given their lives. (…) This is the testimony of someone who believes that the human condition is not condemned to selfishness and the obscene hunt for money.” (Galeano, 1990)

A constitutional protection for the Earth. Why not?

See you next week. 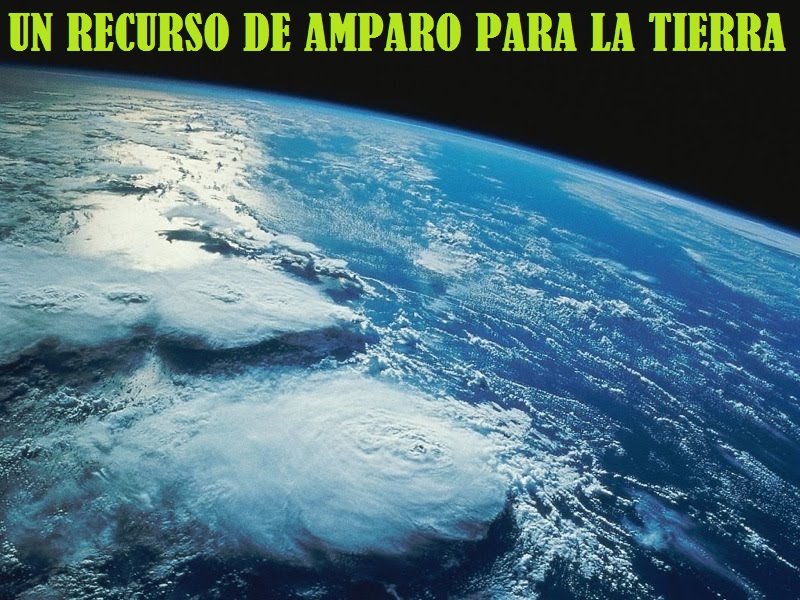 All pictures extracted from Google.

I would have loved if they have me Galeano to read at school… it would have replaced Civic Education, History, Economy, Accounting, Geography and Literature all together!!!