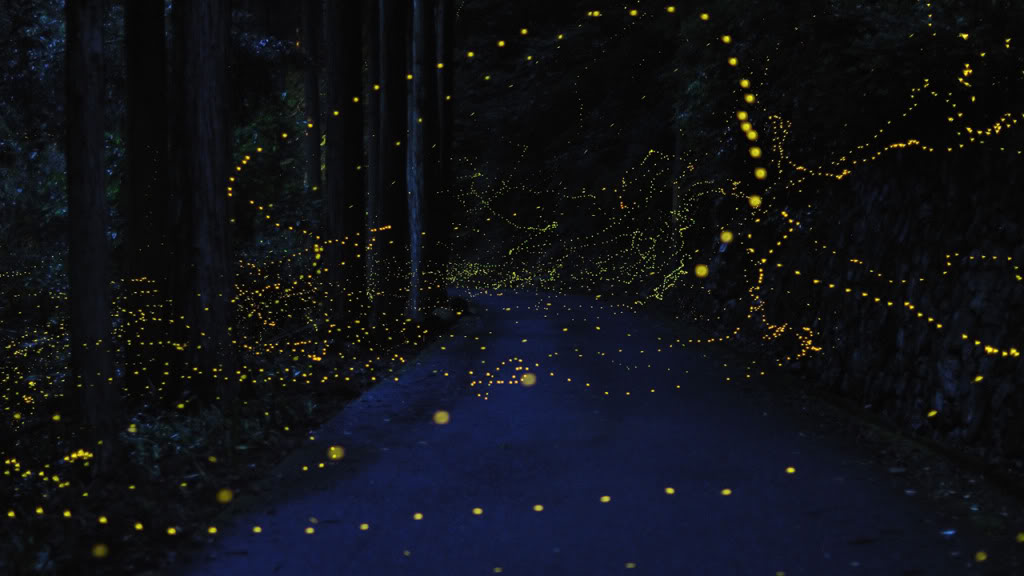 Camping helps you generate a mental-sacking

I will share a few lines, as if I was thinking aloud, a modest wonder, but with a foot – always– on the ground and the other one imagining, drawing. 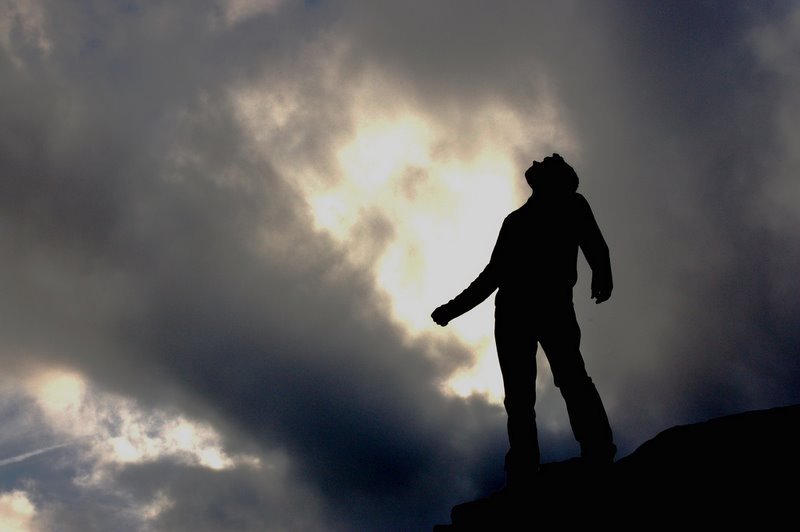 That life is only one, I have no doubt about it… And, I would add, it’s short; truth that unfolds itself as one grows up. And as one grows up, time seems to go by faster. It slides away from us in our everyday routine. And suddenly we will find ourselves receiving a retirement pension, without even knowing if we did what we wanted to. And we look back, trying to find the origin, that moment in which we failed ourselves, leaving our dreams to waste.

We would ask ourselves, when was the moment in which we gave up, in which we stopped doing what we really wanted to do because the system was calling us constantly to work selling our time in change of money, and transforming time into something tangible, when time shouldn’t ever be really quantified, knowing that everything is relative and that it is another one of man’s inventions. And a failed system, creates bizarre landscapes, evidences that the WHOLE society is mistaken, sick, lost its course. We lost our course.

The sacking that occurred in all of our country because of the dysfunctions between the media, our rulers and the police force, are the sings that society is reaching a climax, a boiling point of ideas such, that there will be no other choice but to start to search for new ways of solving the underlying problems that concern the social and environmental reality. The summer sackings are, for the argentines, a déjà-vu of a few years back, or a lie, or evidence that the system is rotten, and that the problems keep coming to us over and over again, sign that we are doing something wrong. 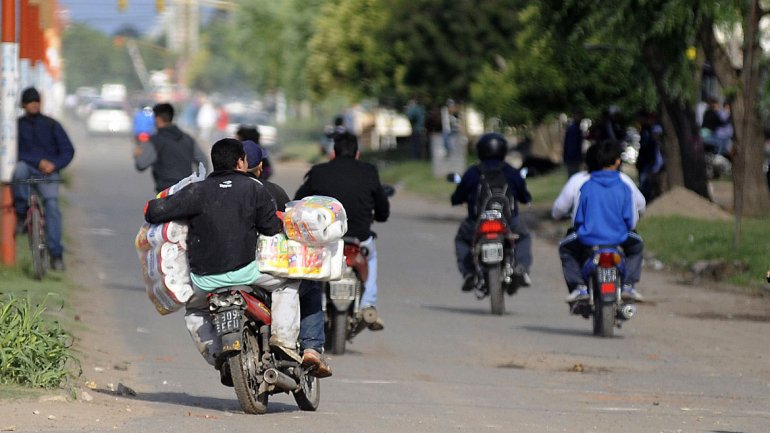 If life is only one, then the answer is in the how. How do we live our life? How frugal are we? How many things could we give up? Can we separate ourselves from our customs? How simple are we? (which is not a synonym of conformity)

A way of trying ourselves out –and this is only an open proposal– is to go camping. Take, even if it’s only for a night, only the basics: a tent, paper and pencil, warm clothes, a pot, “mate”, a book and oneself. Camping a few nights in your life can transform it as it proves that you can be happy with very little.

Truly magical moments occur when camping. Nature displays its functions, and shows a scheme of relationships between all of the components, live and not live, of the ecosystem. We could see a couple of Field Flickers flying around between branches, shouting and singing at themselves mutually. Who knows what compliment was the male declaring to the female. Or maybe, she fell in love with him, and the dance that they perform is only a celebration of love, of life. 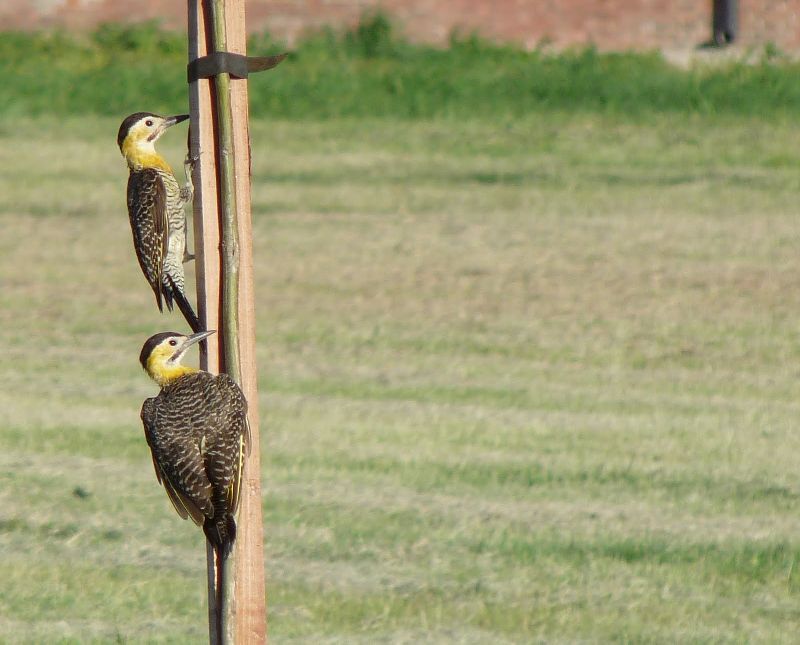 Others that go around as a couple are the Vermilion flycatchers, beautiful small birds, with a bright red chest, easy to recognize for their feeding habits… one places itself over a vertical branch of some bush, checking that there are no predators near; the other one goes up and throws itself into the shrubs in short, quick and precise movements, searching for food for both of them. “Vermilion flycatchers are very friendly, they accompany you if they see you and are not afraid of you” a friend of mine tells me as we stroll with a couple of Vermilion flycatchers following us 10 meters away from us alongside the wire fence which we were walking next to. 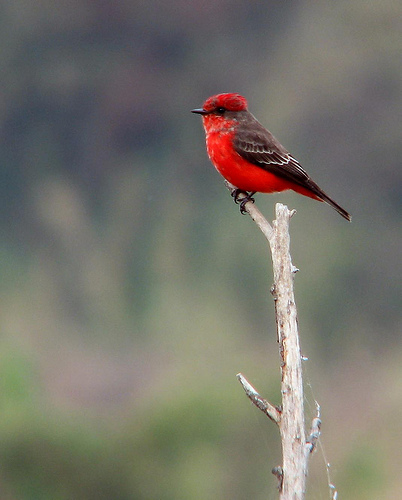 There was a Rufous Hornero, all crazy, small, brown, sober, but with a lot of authority, choosing very carefully different bits and pieces scattered between the dry leaves: dry small sticks, stones, small pieces of old roots covered in mud, petioles belonging to strange leaves… he would go and choose. Sometimes he would cry out as if complaining, “Oh! This isn’t useful to me!” …. Or suddenly he would cry out in a higher pitch, “Eureka!”, he would pick something up and fly away very quickly and directly towards the place where he was building, or rather designing, his nest.

As he got to the branch where his house was being raised, he would take his time to put everything together in a natural architectural piece of art, managing to build a spiral-studio, with an entry area to check the weather before going out and fly, and a second different area to incubate the eggs and rest. This second “room” is separated by and internal curve that is inside the nest to minimize the risk of other species stealing its eggs as food. 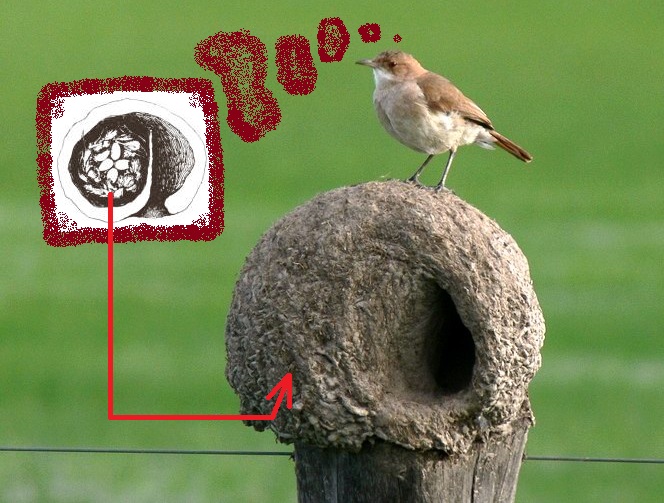 In the shower area there was a Praying Mantis placed as an alpinist going up a cliff on the door. Disproportionately large eyes compared to its body, lost stare, observing absolutely everything at the same time. Its antennas swinging softly. What were they registering, I don’t know, maybe the temperature, the humidity of the air, I don’t know… Two years ago I had camped at the same place, and there was another Praying Mantis in the same place. But it wasn’t this one, the other one must have been its great grandfather, who left as its legacy the role of guarding the camping’s dressing room.

As I got out of the showers, walking toward the tent, a White-banded Mockingbird made a noise with its nervous personality, always in a hurry, glamorous, almost dressy-casual. While singing, she went from one place to the other; her steps seemed orchestrated by some classical music which I couldn’t listen to… in another life, the Mockingbird could have easily been an orchestra conductor. It arrives flying gliding very quickly, it spreads its wings very close to the ground, it lands perfectly standing up as a Chinese Olympic gymnast, and it stays in its triangular pose: body and tail forming a “V” with its angle varying between a very closed or open “V” plenty of times per minute, searching constantly for balance. 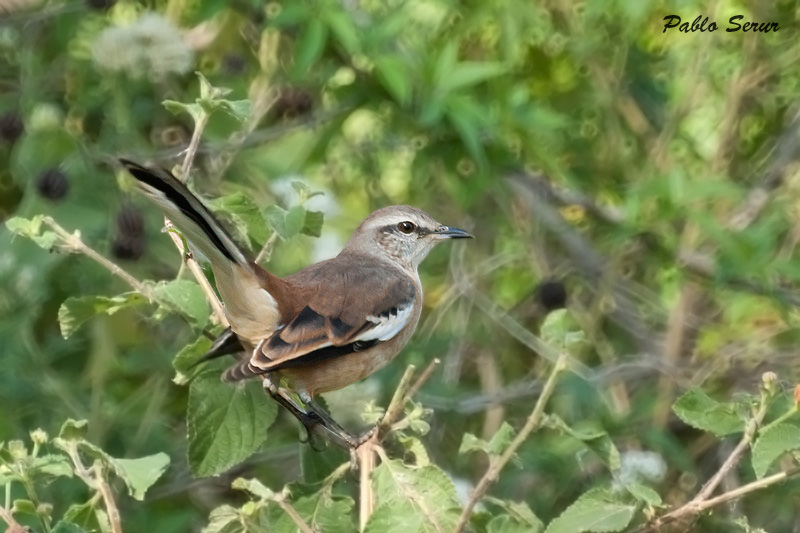 I was already completely captivated by Nature. I was enraptured by so much that was happening there all the time, while I was busy worrying about the avatars of life in society. And the night arrived at the campsite… I went for a walk.

And while Pablo Neruda described my feelings in the middle of the night, I looked, in fact, at the stars and observed them, fascinated. It was a night with several shooting stars, and I’m not lying. One in particular was huge. Low in the horizon, but in some way, close. Descending down a diagonal from right to left. A fire ball measuring almost half an inch to the sight with a tail measuring more than one inch… as it got to the clouds, its outline, and its light, flashed as it crossed different densities of the cloud, getting lost afterwards behind the forest that covered the last line of the horizon. Simply incredible. But, why so many shooting stars? Maybe lots of people took advantage of them and wished for well-being and world peace? Or do we only ask the shooting stars for trivial things?

If, while walking at night through the forest, we would ran into Henry David Thoreau, maybe he would casually say… “In vain I search for an external change / and I can find no difference, / until a new beam of unexpected peace / enlightens the most remote places in my mind.”

Glow worms started to appear in the undergrowth, between branches, between trunks, between bushes, between grasses, everywhere… small lights, that if one stopped and relaxed for a while, and if you tried to follow one glow worm individually, you could build a sequence of still frames in your head, trying to join all the dots of their sparkle (just as a five year old kid with a drawing notebook to join dots and draw animals), forming the flight path of a glow worm. What would it look like?

When I got back to the tent, where we had left everything, books, the thermos, bottle of water, towels, clothes drying themselves, a mat… some Horses sacked everything that was in their way in search for food and something else. Because it seems that they were revolutionary horses… one of them had bitten my books and, in particular, The book of embraces of Eduardo Galeano has a very deep bite, as if it was saying through that mark “this is the truth…”. I open the dusty book, and read:

“The system: / Functionaries don’t function. / Politicians speak but say nothing. / Voters vote but don’t elect. / The information media disinform. / Schools teach ignorance. / Judges punish the victims. / The military makes war against its own compatriots. / The police don’t fight crime because they are too busy committing it. / Bankruptcies are socialized while profits are privatized. / Money is freer than people are. / People are at the service of things.”

The sacking perpetrated by those revolutionary horses, derived in a mental-sacking which allowed us to create an Utopia, thinking in the social context in which we live and in a different future. To think in relation to the material sackings which were occurring in the country, product of a mixture of things, social class differences and interests, crossed symptoms of a same sickness hosted in the soul itself of the social organism.

And I say material sackings because it wasn’t only food what was being sacked, but in the basic needs of the people we could also find any amount of electronic devices, cutting-edge technology, and all of those things that the ads in the TV promised to be essential to happiness, sad reality. Sackings for food, to subsist, is an acceptable reality, but the sackings being portrayed for believing what the television says and joining to the chaos as a vile opportunistic, no…

And Galeano –always– tackles: “The television, does it show what really happens? / In our countries, television shows the reality that it wants to happen and nothing happens if the television doesn’t show it / (…) / Television shoots images that reproduce the system and voices that echo it, (…).”

My mind was already, indeed, somewhere else. It always happens to me that I let my mind fly too much…

I went to sleep, and when I woke up, still chewing my thoughts of the last night, I began to disassemble the tent. When I removed the part that covers it from the top, I saw how some very tiny spiders had built a small spider web, a beautiful home, in the different nooks that were created between the tent cover and the tent itself. The spider web even provided fresh water in the morning for its tenants, as it caught dew drops in its design. 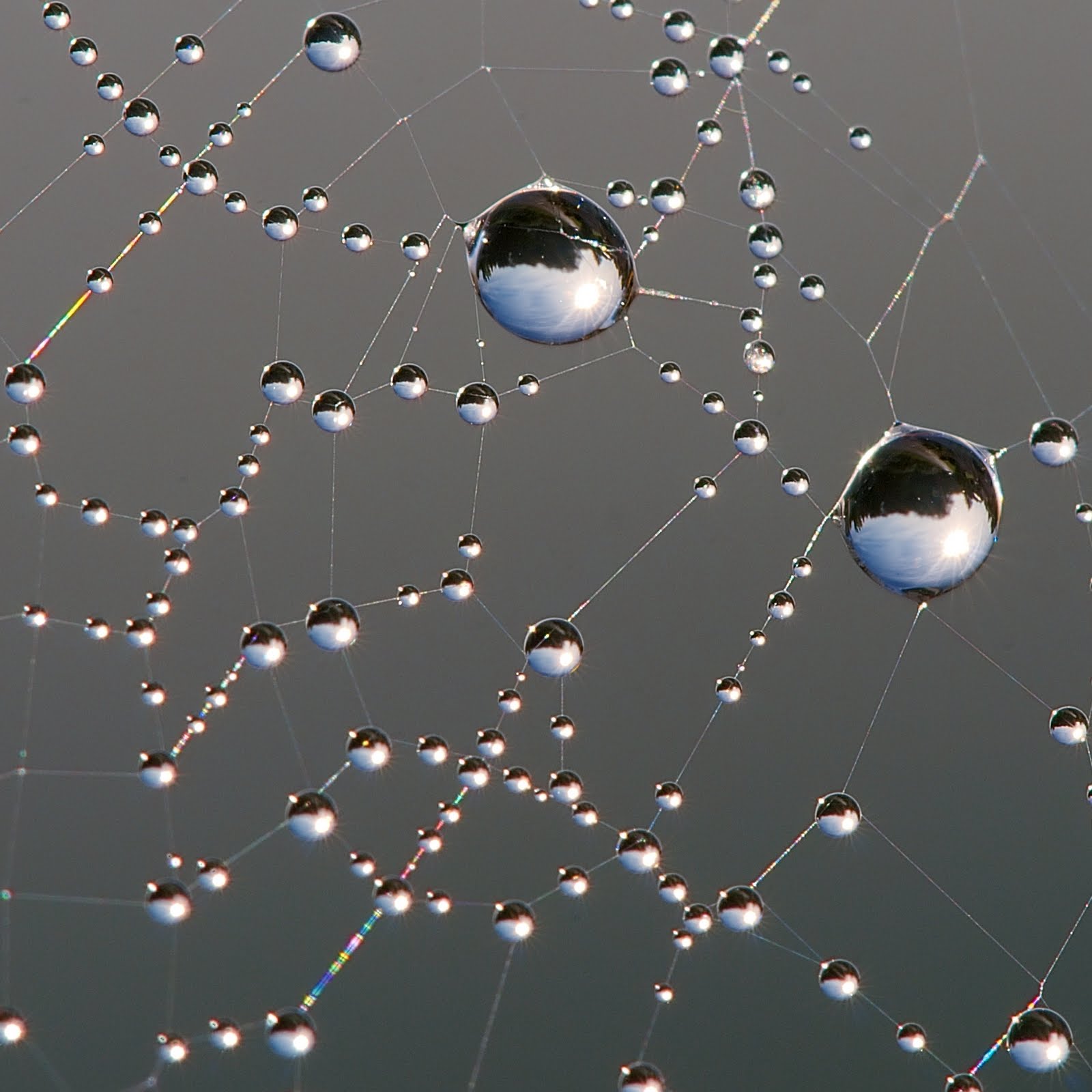 Nature kept surrounding me with its complex scheme of relationships so magical and simply arranged for the non-judgmental human eye, for the eye that observes from the art and not from a mechanistic point of view.

I turn around to pick up the mat from the grass and I manage to locate an Ant, from behind, dragging a GIANT raisin… and it moved it… and I could imagine it shouting at me. “COME ON!! IT IS POSSIBLE!!” And I can identify myself with Neruda again:

Camping gives you perspective, it gives you peace. And it helps you… in some unexplainable way that exceeds words. Words were invented by us, Nature, however, not. Sweet reality.

Pictures extracted from Google. Except the one in the interior of the tent which is me. And the one of the Hornero was modified by me from 2 pictures from Google in one, with Paint.