An emotional week for the Park

Two years and a half ago I arrived to Santa Rosa seeking for tranquility in a daily basis which I did not manage to materialize while living in the big city. In a motivational video I watched years ago, it was recommended to live a time of your life in the city; but it was as much important to live another time of your life outside the city. So I decided to follow that advice in order not to transform myself into a recurrent person.

In the first months of 2011, I remember an essay we made for university on “Urban Ecosystems” where we collected all the waste we found in the Oliver Park, a green lung of the city, and classified it between organic and inorganic.

A small green patch of land where people meet to drink mate and talk about life, they take their kids to play, or simply go and contemplate the peace within that tiny ecosystem, with its birds throwing themselves from the trees and diving towards the ground, seeking for that little crumble of bread falling from that little girl’s sandwich when she ran after a butterfly that passed by… tiny moments loaded with life that occur in those privileged spots of the city, where you find soil instead of concrete, where water is retained and is not lost, drained by the gradient the street commands, and where green prevails over grey.

This week, that green patch of land was threatened by the advance of the dumb frontier.

Dumb because, each time a city grows from inside to inside itself, this is, it grows within its own limits, the same surface, and it does transforming itself vertically (more buildings) and transforming any kind of green space in the name of a “well used land” – for example, turning a park upside down to build up a huge garage.

Of course, a pensioner, whose family lived the last four generations beneath the same roof, is persuaded to sell his property, only to build afterwards a building with people inside who are alienated from their neighborhood and neighbors.

It’s a trap for the god old chap, as they will make tons of money renting the new apartments for life, compared to the money paid to the former owner of the land, increasing the rent each year as the human exchange within buildings (and cities) always exists, making the real-state business nourish from them…

For example, half of my salary disappears when I pay the rent (it is not a complaint, but a fact). That new building does not have green roofs to compensate the cleared woods and the soil replaced with concrete. 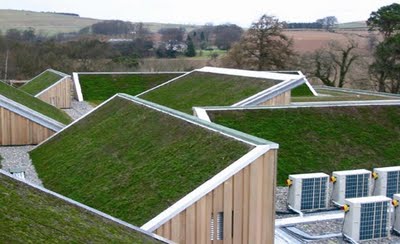 And each new tenant, who religiously pays his rent monthly to the respective real-estate agencies which laugh of all the process, feel proud when buying a car thanks to any kind of financial trick, where you buy Today, and pay the rest of your unadventurous live.

And those new cars –despite the oil they will demand from here onwards- need to have garages and parking lots in order to send them to sleep any time the driver makes a quick lonely ride to the city center. Like killing a mosquito with a flame thrower, instead of grabbing the bike, the car takes to those few blocks, in exchange of using an entire internal combustion engine. 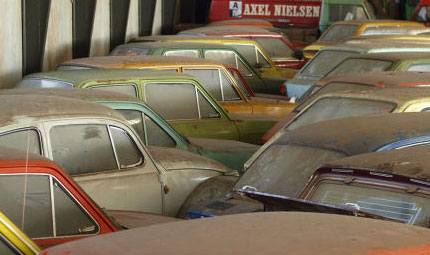 The thing is that the neighbors of Santa Rosa, when they knew the news, they used internet proactively and in only one day a movement was created in defense of the park with participants younger than 10 and others older than 70. Artists, students, mothers, and grandparents, all the community gathered up in the park and expressed the obvious… we do not want concrete, we want trees…

It was very emotional, they were, as well, defending the park, and their screams were like a warning sign saying that IT IS US the ones that, for the moment, need to learn to govern ourselves. And to leave this stated, one over the back said “what if we put all the bricks they took and piled up, and put them back to their respective place?” 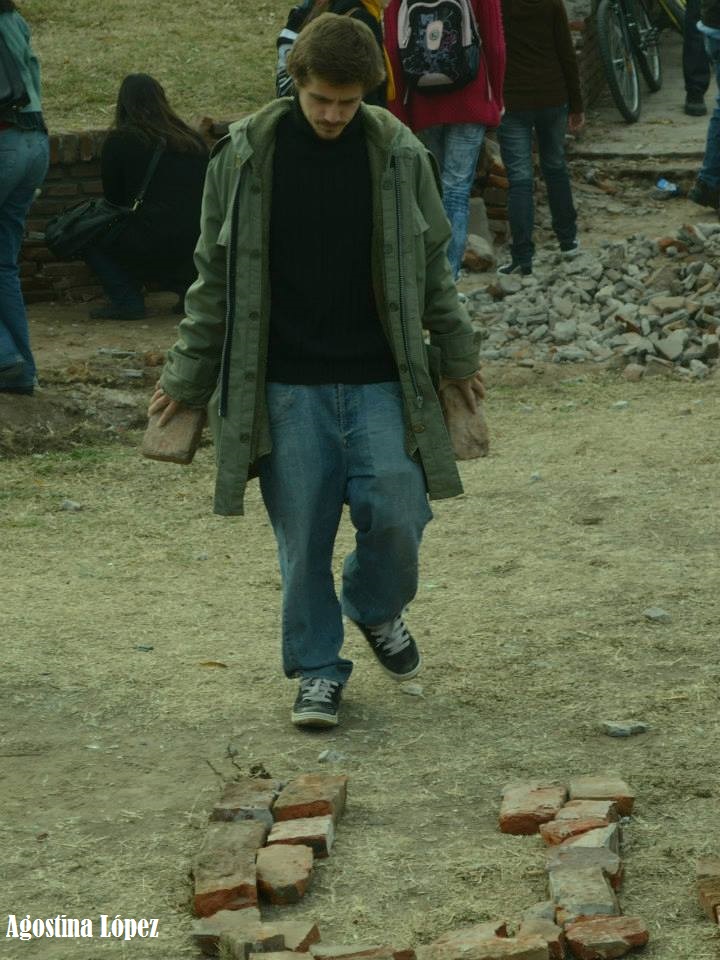 And there we went, around 70 people, lifting bricks with their own hands from a mountain of debris, rearranging them the way they were before, stating clear that the people, the community, the neighbors, the youth and the future have spoken.

We do not want a parking lot in a natural recreational space, because it would imply to go mentally backwards as a species; you do not solve traffic problems with more parking lots, but by stop selling cars, postulating them as an extension of manhood or a synonym with independence.

“(…) the popular participation unchains in powerful energies, that are not even considered as real, and the collective fervors can be able of making the prodigy any big magician can do” (Galeano, 1990)

So many people spoke about it, so many people went to the park that day and so many bricks were put into place, that the parking lot project stopped the next day. The Critical Mass Bikers went out sustainably to the streets the following Saturday and went past the park to say hi. A sort of gratitude given by the bikes, or better said, a reminder, that the bicycle is a good option for urban mobilization. 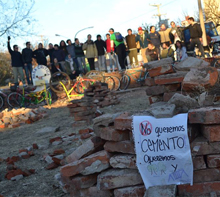 It is true, there is a lot of other things going on which deserve to be defended with screams as well, maybe the destruction of this urban park is NOT the most important thing regarding environmental negligence (our rivers are still contaminates, the same with our soul and air), but I still think it is positive for society to, at least, REACT. They used to not listen to use for these decisions (to put or not a parking lot), but now it is not left unheard.

For you to get an idea of this, in another park, paid guys went in the middle of the night and cut down the trees to avoid unhappy viewers. Very sad, what the decision makers had done… but we now see that those are the last tricks that are left from an old system, one which is now obsolete. We are too many now, asking and breathing change.

Galeano, E. Ser como ellos y otros artículos (To be like them and other articles). Siglo Veintiuno Editores. Buenos Aires. 2010.