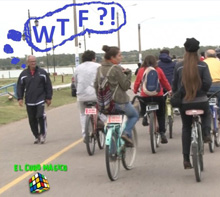 Apolitical considerations (or non-party ones)

Since day one, La Pampa´s Critical Mass has been flooded with questions on which was its origins, backgrounds, ideologies and what did it have to say about this and that. The bike started to protrude in several conversations and, within the process of inserting the bike in the urban life, new kinds of debate appear.

Trying to postulate it as an apolitical movement generates uncertainty or takes out some of its credibility, and some people end up taking it as something with no purpose at all. The most constructive criticism they made us, was saying that the Critical Mass was non-party, not representing any political party in particular, but indeed representing a lot of things with a high political content.

And it is true; from some point of view, whatever we do today in a social level is permeated by politics… This is why I wanted to give some credit to these opinions, as well as shedding some light over my humble non-political view.

A great friend of mine (and one of Ploff.net’s colaborators), Agustín Darío Estala, International Relations Graduate, was always true when making any type of objective and constructive criticism when we were debating. A strong duo we made… and we talked about politics, economy and the environment from a utopic, positive, and, why not, possible long term vision.

¨Since first year I had a subject on Political Sciences…¨ -Agustin wrote to me a few months ago- ¨I kept a definition in mind, which, although vague, was the best and made me defend the concept and feel happy every time people made politics and obviously made me feel I was in the right place:

¨Politics is the art of what is possible¨

It is with this definition in which I stand when I speak and enjoy politics; and it is much wider but it would have nothing to do with anything…

Politics is from where I believe you can transform thing and that light me up on fire. Either through the State, NGO´s, associations, from work, class, etc., because politics covers ALL, precisely because we live in society.¨

He always said to me: what you are doing, without even realizing, is a political speech. And I could not conceive it; I always try to be politically neutral, but in his defence, when someone starts defragmenting the system to make it more intricate and intertwined to Gaia, one cannot avoid stumbling upon bureaucratic obstacles and politicians (extremely antique and narrow minded). Hence, we end up falling into politics in order to make us be heard. This crossroad must be passed by all those who want to change something big in world. Anthony Giddens, sociologist, expresses it very well:

“Must the sociologists actively defend and take forward public actions in favour of practical reforming programmes or social change? There are those who defend that sociology can preserve its objectivity only if those who practice it are carefully neutral in moral and political controversies, but there is no reason at all to think that those who study and stay aside of the actual debates are necessarily more impartial than others in their examination of sociological matters. An unbreakable bond exists between the study of sociology and the social consciousness exigencies. No one with sociological knowledge can be unconscious about the inequities existing in the world today, the lack of social justice in many social situations o the privations suffered by millions of people. It would be weird for sociologists not to take sides over practical manners, and it would be as illogic as unpractical to try and ban them from using their sociological knowledge when doing so.”

I was stunned when I read those lines for the first time. The fragment I underlined for you simply told me that when someone gains awareness, when someone comes to realize what is going on in the world, he is compelled to activate himself… he is willing to be part of change, he can no longer stay quiet in front of the TV. And it is then when you fall on politics. In this sense, assisting the Critical Mass can be loaded with political content. Because the cause and effect logical relationships end up on politics…

Bikers rolling down the streets, flowing like a river, people observing, stunned, conversations taken forward afterwards, the evidence of a system crying out for a replacement, and the consecutive political decisions which must follow in order to make a daily reality emerge from a biking coincidence: a society which wants to transport itself in a sustainable way.

My need to denominate the Critical Mass as apolitical comes from a more simplistic perspective, which tries to see it as it is, in its pure essence, avoiding labels. In essence, what we want is to change the world, no matter how utopic it may seem. To re-establish the good vibes among our planet, ourselves and the entire biosphere.

Debating and opinion exchanging will always be important for us to make ourselves be heard seriously. But I want us to use the lack of capacity of language when trying to transmit emotions and deep thoughts from our unconscious in our favour. We cannot explain everything with words, and the ecological paradigm shift transcends politics, the world of finance and our implanted belief systems.

In one the latest critical masses, a mother went with her daughter, and this one went with a friend of hers… her friend came across her grandfather who was fishing on the shore of the lake… we shout at him and told him to join us, which he instantly did to ride with us. 2 different generations, riding side by side, happy, with mixed feelings.

In the critical mass which Samuel Castro organized in Villa Mercedes, San Luis, another anecdote occurred, which is worth reading with goose bumps. A father built a special bike for her blind daughter, who always had enjoyed the wind in her face while riding.

This kind of collateral effect that a social movement like this has, whether its apolitical, non-party or non-whatever, transcends the explanatory power of words, and it is there where I feel we cannot define it through politics, but what is really nice always escapes through the tangent of any concept we are trying to integrate.

“Words are dangerous instruments and sometimes do not strike on target. Words used by people to persuade us invite us to translate them in our own terms; we reform them and often end up interpreting the opposite to what we had been said. (…) it also happens that there are words which offend us only because they generate associations in us which were far away from the intention of whom spoke those words.

The visual, in exchange, tends to be like a bridge over the labyrinth of words. It impacts us with an emotional power and with an immediacy which leaves no space for insight or doubt. As well as with music, it jumps over rational and reasonable thoughts. (…)

Understand that words put us in a defensive mode. If you need to explain yourself, your power is questioned. The image, on the contrary, is imposed by itself, like any given something.

In the end, we can debate on whether it is apolitical or not, non-party or not, but we would always leave emotions aside, as well as the anecdotes and goose bumps we get while biking in a huge group. A unique sensation which you can only feel if you go with us at least once.

It will be until next week, but first, I wanted to thank specially to Jorgelina Superi and Luisina Bassa for producing, filming, editing and supporting the Mass through their work in 2 great interviews which were released these days on TV.

Critical Mass / La Pampa – Interview for We Are La Pampa