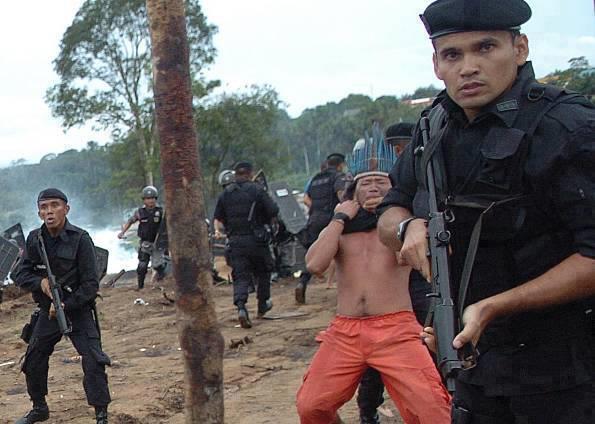 Let me tell you that  in Belo Monte, in the Mato Grosso, Brazil, a hydroelectric dam is being built, for which 400.000 hectares of forest will be flooded, affecting whole ecosystems, trophic nets, matter recycling (oxygen, nitrogen, phosphorus, etc.) and pushing out compulsorily  the 40.000 indigenous of the area… A photograph has been sent to me where the evacuation of de Kayapó tribe (native inhabitants of this place) has been recorded…

I was overwhelmed by all what the photograph shows: the area already cleared, the drained and dry soil, the soldiers deployed in order to perform the “evacuation” –bearing witness to governmental action that authorize and regulate violence- and the impotence of the native being pushed out of his land to be able to provide electric energy to the city nearby.

A process which is not new, but has been repeated as shaping pattern of our economy since colonialism began. Arrive, conquest, push out, transform, exploit, produce, export, Bye bye, I’m gone!

In Latin America, the destruction of the Inca agriculture perpetrated by the Spanish conquerors implied the destruction of the means of survival of an entire population (cultivation terraces) so that a handful of men could make its domain everlasting and keep the POWER. The Spaniards were only interested  in the gold and silver that could be extracted fast from Potosí. For that, lands were scattered among wealthy men and the natives were enslaved.  In 150 years of conquest, only 4-5% of the original population was left. (this matter is excellently handled in the book of Antonio Elio Brailovsky, Memoria Verde. Historia Ecologica de la Argentina. [Green Memory. Argentine Ecological History]. Editorial Sudamericana S.A. Buenos Aires 1991)

Nature was too much for the new inhabitants of the continent: rivers were VERY abundant, flatlands were VERY vast, and the animals were VERY strange. The excess of nature gives the sensation of unlimited progress, and the indefinite natural resources extraction was seen as something correct, Nature had to be tamed. Thus, the environmental degradation is presented as improvement, progress. The desirable human work during colonialism was to accelerate in a few years the same process of nature’s depredation which had needed of many centuries in Europe.

The colonialism was nothing but that: PRIMARY ACCUMULATION PROCESSES (concept extracted from chapter XXIV of “The Capital” of Karl Marx), previous to capitalism economic processes in which the conqueror countries transformed their productive and economic models in order to grab the best bite of the resources of the new conquered lands. Economic processes in which capitals were accumulated in a centralized manner among a few, for later –having the cash to do so– establishing capitalism.

This kind of processes are still on nowadays and, taking advantage of our means of communication, we cannot allow them to continue escaping from the collective consciousness.